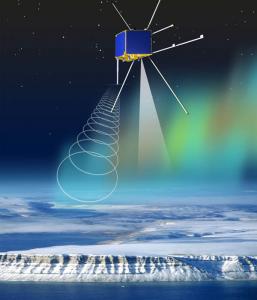 The e-POP payload is designed to help scientists expand their knowledge of near-Earth space. As the Earth’s atmosphere reaches to higher and higher altitudes it becomes less dense and more ionized, merging into what is called the ionosphere (starting at about 60-80 km altitude) and eventually into the region of space extending well past lunar orbit, called the magnetosphere. Here many processes that are driven by the sun produce the aurora, affect satellites, and even affect systems on the ground such as power grids, navigation systems, and pipelines. e-POP aims to help enhance our understanding of these processes – generally called space weather – by providing new high-resolution in-situ and remote observations of particles, electromagnetic fields, and auroral displays.

In detail, the scientific objectives of the e-POP mission are to

The escape of plasma from the polar ionosphere – its acceleration and subsequent transport towards the magnetosphere – is one of the most important processes in the Ionosphere-Thermosphere-Magnetosphere system. The e-POP science payload carries a suite of 8 science instruments (experiments), including imaging plasma and neutral particle sensors, magnetometers, radio wave receivers, dual-frequency GPS receivers, CCD cameras, and a beacon transmitter. The imaging plasma sensors (SEI and IRM) measure particle distributions and the magnetometers (MGF) measure field aligned currents on the time scale of 10-ms and spatial scale of ~100 m. The neutral mass and velocity spectrometer (NMS) measures the density and velocity of major atmospheric species. The CCD cameras (FAI) perform auroral imaging on the time scale of one second. The radio wave and GPS receivers (RRI and GAP) perform near real-time imaging studies of the ionosphere, in conjunction with ground-based radars, as does the beacon transmitter (CER), in conjunction with ground receiving stations.