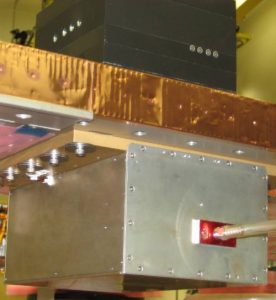 NMS mounted on the e-POP deck on CASSIOPE

NMS measures neutral particle constituents using an open-source electron impact ionization chamber and a microchannel plate (MCP) imaging detection subassembly. It employs a planar entrance aperture with a plasma filter to repel low energy charged particles. The rammed neutrals enter the aperture and traverse through an electron source. The ionized population is then accelerated into the instrument by a potential difference between the entrance aperture and the detection subassembly. Ions arriving at the annular microchannel plate detector are sorted according to their arrival angle (azimuthal location) and energy (radial location). Thus, the instrument is capable of resolving both the neutral particle composition and the flow velocity.

NMS development was spearheaded by the Japan Aerospace Exploration Agency, with Dr. Hajime Hayakawa as principle investigator. MEISEI was the prime build contractor.