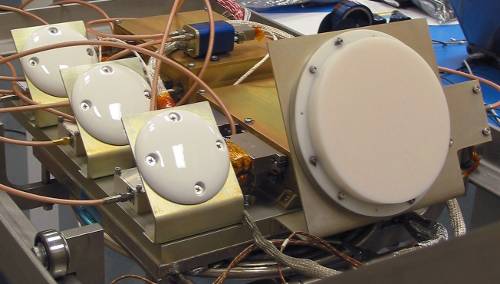 GAP employs five differential Global Positioning System receivers and associated antenna complement to provide the e-POP payload with high-resolution spatial positioning information, flight-path velocity determination, and real-time, high-stability timing. In addition, by measuring the arrival times of the various GPS signal wave fronts at each antenna against a very stable time base, the relative range between antennas can be determined, yielding real-time spacecraft attitude determination. One of the GAP antennas is mounted on the anti-ram side of the spacecraft and dedicated to ionospheric radio occultation measurements in which the relative phase delay of the measured L1 and L2 signals (at frequencies of 1.57542 GHz and 1.2276 GHz, respectively) from different satellites of the GPS constellation will be used to determine the electron density profile of the ionosphere using tomographic techniques. The other four antennas are mounted on the anti-nadir face of the spacecraft, with bore-sights normal to the spacecraft surface, and are used primarily for the timing, position, and velocity measurements.

Schematic showing a GPS satellite being occulted by the Earth from the point of view of a Low Earth Orbiting (LEO) satellite. The GPS signals (L1 and L2) are bent as they pass through the ionosphere and are seen by the GPS receivers on the satellite.